While the Hardware team deals with the mechanical components within the FLOMESS module, the Mechanics team is mainly working on the integration of the mathematical modell required for calibration. During Flight and the calibration process multiple strain gauges record the microscopic deformations inside the module ring. The so called “Skopinski method” is used, to calculate the acting internal loads related to the measured output signals. 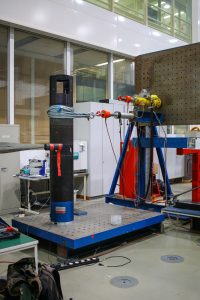 Test stand in the laboratory

In practice we take care of the design of the test stand for the application of defined load cases, the test execution and their analysis. Especially with regard to the influences during flight, suitable assumptions must be made in order to make an simulation realistic. In addition, the verification of the results obtained plays a important role, which is ensured by the data determined from the calibration tests. At the same time we are concerned to provide scientific contributions for data acquisition, conversion and evaluation for the documents produced during the course of the project.

Eight strain gauge rosettes are applied at a distance of approximately 90° within the inner wall of the module ring with different orientations. Depending on the load on the module, each one provides an individual strain signal, which quality is depended on a flawless adhesive bond. Since the orientation and bonding of the strain gauge rosettes are very sensitive to imperfections, the output signals, i.e. the resulting longitudinal strains, transverse strains and shear strains, are faulty. Therefore a direct conversion of the external loads from the strain signals is not recommended.

After the selection of suitable models for determining the stress loads, the “Skopinski method” published by the NACA (National Advisory Committee for Aeronautics) in 1954 was chosen for correlating the output signals of strain gauges to the effective flight loads. This method is based on the determination of strain gauge output signals at previously known test loads which are applied to a structure. This results in an almost exact conversion, based on the real structure with imperfection-contaminated strain gauges or strain gauge rosettes.

Each internal force is assigned an associated influencing factor depending on its intensity of the strain gauge output signal. The Skopinski method only takes into account a linear relationship between influencing factor and internal force, whereby assumptions can also be made which have a non-linear relationship. On the basis of all resulting loads, we can calulate the six internal forces: the normal force, the two shear forces, the two bending moments and the torsion moment.

Assuming that strain and load are linearly connected, the slope of this linear relationship can be determined by calibration tests and extrapolated during flight.

Especially the disturbances during the flight such as vibration and temperature influence the measurement compared to the idealized test experiments. To minimize these errors, it is necessary to describe the system in detail by partially redundant calibration attempts. In order to be able to interpret subsequent influences of the disturbances, tests are also carried out which affect the structure by a transient temperature distribution.

Four team members are available for a broad setup and fast handling of all tasks in the Mechanics section. Everyone has the basic knowledge of load measurement, and in our case the Skopinski method. When special tasks arise, the team is committed to tackling them together. Jan acts as the coordinator of the section and forwards information from the team. In addition to the normal tasks, Kerstin organizes comprehensive team matters and also forms a hub between the section and the whole project. Johannes and Sebastian work on unusual areas such as temperature and spin disturbances due to their affinity for load measurement.